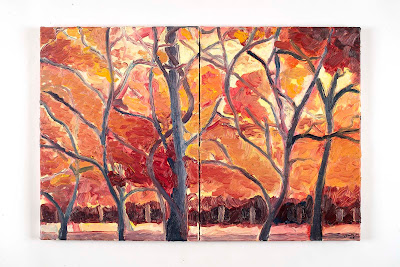 What was initially meant to explore one aspect of Walpole Autumn (see below) turned into another idea weaving past and present together. 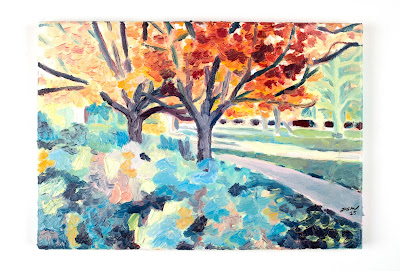 Eden Divided draws inspiration from Frank Auerbach who reinterpreted Biblical themes from traditional paintings - with the use of abstraction. I have never done a diptych before and this new idea drew inspiration from a magazine, from which I became interested in the diptych of the tree. Although Eden Divided can be seen as one piece it could also be seen as separate realities since the composition continues on the sides. What was initially meant to be another tree transformed into a serpent - the timeless symbol of evil.

This diptych is a response to how conflict and injustice causes crises and division today and that sometimes nature is destroyed by greed. It is my personal belief that everyone has an ongoing duty to be stewards of the Earth today.

I am not retelling the Garden of Eden story but responding to what happens - when some people today abuse their free will and choose to cause destruction rather than fulfilling their duty to be stewards of the Earth, so we all have a chance of being reunited with Eden.